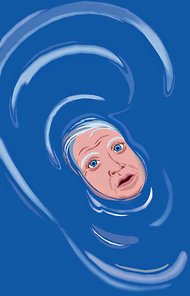 Hearing loss, a disability currently untreated in about 85 percent of those affected, may be the nation’s most damaging and costly sensory handicap. It is a hidden disability, often not obvious to others or even to those who have it.

Its onset is usually insidious, gradually worsening over years and thus easily ignored.

Most of those affected can still hear sounds and think the real problem is that people aren’t speaking clearly. They often ask others to speak up, repeat what was said or speak more slowly. Or they pretend they can hear, but their conversations may be filled with non sequiturs.

As hearing worsens, they are likely to become increasingly frustrated and socially isolated. Unable to hear well in social settings, they gradually stop going to the theater, movies, places of worship, senior centers or parties or out to restaurants with friends or family.

Social isolation, in turn, has been linked to depression and an increased risk of death from conditions like heart disease. And now there is another major risk associated with hearing problems: dementia and Alzheimer’s disease. This finding alone should prompt more people to get their hearing tested and, if found impaired, get properly fitted with aids that can help to keep them cognitively engaged.

Perhaps it will also grab the attention of politicians who determine what is and what is not covered by Medicare and, in turn, by other health insurers. Currently, Medicare does not pay for hearing aids, and many older people cannot afford the many thousands of dollars that quality aids and auditory training can cost.

Furthermore, for the fewer than 15 percent of hearing-impaired people who have hearing aids, the devices themselves are not an adequate solution. Hearing aids work best when the distance between the sound and the listener is less than six feet and when background noise is minimal, which can preclude clear communication in theaters, airports, restaurants and many other social settings.

Hearing and the Brain

Although hearing impairment was first linked in major medical journals to dementia and cognitive dysfunction more than two decades ago, not until last year did researchers demonstrate an independent association with dementia over time.

By following 639 people ages 36 to 90 for nearly 12 years, Dr. Frank R. Lin, an otolaryngologist at Johns Hopkins Medicine, and his colleagues there and at the National Institute on Aging showed a direct relationship between the participants’ degree of hearing loss and their risk of later developing dementia or Alzheimer’s disease.

The relationship between hearing loss and dementia persisted even when other factors linked to cognitive disease, like hypertension, diabetes and smoking, were taken into account.

“People are most likely to notice communication problems when their hearing loss exceeds 25 decibels,” Dr. Lin said in an interview. “It’s not that they can’t hear, but they can’t understand. Hearing loss at this level affects the clarity of words.”

“The brain dedicates a lot of resources to hearing,” Dr. Lin said. “When the clarity of words is garbled, the brain gets a garbled message. It has to reallocate resources to hear at the expense of other brain functions.”

Thus, the overworked brain may lose “cognitive reserve,” the ability of healthy parts of the brain to take over functions lost by other parts.

Another mechanism may be the effects of social isolation. “A decline in social engagement and resulting loneliness is one of the most important determinants of health outcomes in older adults,” Dr. Lin said. Isolation has been linked to an increase in inflammation throughout the body, which in turn can result in age-related disorders like heart disease and dementia, Dr. Lin said.

Rose Marie Jewett, 83, of Janesville, Wis., who had experienced progressively worsening hearing loss for 40 years, had all but given up hope of hearing others speak or ever again enjoying music.

She said she could understand how hearing loss could lead to dementia, because she was “forgetful” when she did not hear what she should have heard.

It’s not that she forgot things; rather, she had never heard them to begin with, and the strain of constantly trying to piece things together was taking its toll.

“When you can’t hear anybody, you don’t pay attention,” Ms. Jewett said. “You shut yourself off from the world, you don’t think very well, your memory gets bad and you get kind of dull.”

But now it’s a whole new world for Ms. Jewett. Linda S. Remensnyder, an audiologist and founder of Hearing Associates in Illinois, taught her how to maximize her ability to hear clearly in social settings. She fitted Ms. Jewett with the right kind of hearing aids and with devices that allow her to hear clearly on the telephone, when watching television and in public settings that have been equipped with hearing loops.

A hearing loop, installed around the periphery of a room, is a thin copper wire that radiates electromagnetic signals. The signals can be picked up by a tiny receiver called a telecoil that is built into most hearing aids and cochlear implants. With the press of a tiny button on the aid, sound comes through to people with impaired hearing with even greater clarity than can be heard by someone with normal hearing.

Since 2009, Dr. Remensnyder said, hearing loops have been installed in about 1,000 public places, including museums, stores, banks, theaters, airports, sports arenas and other spaces that are challenging for the hearing-impaired.

“The public is misled into thinking that by getting two hearing aids, they’ll be able to hear everywhere,” she said. “Aids are just a small segment of the solution.”

Neither Dr. Lin nor Dr. Remensnyder can yet say whether improving auditory signals for the hearing-impaired will diminish or delay the development of dementia. That remains for a clinical trial to demonstrate. Meanwhile, Dr. Remensnyder said, it can “revolutionize” the lives of people with hearing difficulties, a virtue in itself.

The site information is for educational and informational purposes only and does not constitute medical advice. To receive personalized advice or treatment, schedule an appointment.